Loving my new style morning meditations where instead of attempting to be of no thought, I allow and invite all thought and inspiration to come through (thanks to my spirit guides for suggesting it) – instead of half an hour I did 1.5 hours and still didn’t want to stop. Came up with a whole heap of other things I would love to experience as part of my new found resolve to dream big and dream lots. I really didn’t think I could get much happier in life in a single burst (but always do over time through working on myself) but following my spirit guide advice has quadrupled my happiness quotient.

Performing reiki on a broken plant. It’s awesome and I can totally feel it.

Leaving another portal of a house, having found myself another home. The global village idea is germinating in many minds aside from my own, it is so real now I can almost taste it.

Getting an unexpected bonus – a ride to the metro station so I didn’t have to walk with my luggage.

Having the most fated synchronistic conversation in the shortest time span – about going somewhere where you don’t think there are any “your” type people but as soon as you decide to find them – there they are. Just what I needed to hear.

Train stations and travel are so much better than airplanes. It’s trains for me all the way from now on whenever possible.

Got a compliment from a conductor: “you’re all kinds of cute” lol 🙂

Watching the sunset from the back door of the last car of the train – rails shining in the last rays of the sun hiding behind the mountains in the horizon. Got cool photos to share. Looking forward to watching sunrise in Arizona – 5am arrival time!

Having another one of those heart bursting “happiness in every pore” experiences that made me cry from joy. Never know when they would hit me and it is my third one. First one was on the bus in Laos 3 years ago, second one looking out on the blue waters in front of Chanilly’s in Vanuatu 2 years ago and now is the third on the train leaving LA. If that is what nirvana feels like then I see why people dedicate lifetimes to it’s attainment, but I would still rather live it up in less intense but more constant state of happiness with occasional glimpses of nirvana than become a monk and attempt to get rid of all desires in the promise of everlasting nirvana. Sounds a little like “have a sin free life and you get to go to heaven at the end of it” and I just somehow don’t buy that story.

Catching up on all outstanding personal emails. I should seriously learn the art of short emails. Even with putting most of my experiences on a blog my emails are still so super long and knowing I need time to write them I procrastinated forever, while I am sure a less full on but more frequent messages would be more appreciated. I just realized it feels like a reflection of my overall personality and communication – less frequent but more intense. If it really is just me maybe I should just leave it as is then.

String through the album of dream images I collected over the past 48 hours – of the deliciousness of it all!

Feeling really scared about the course I am going to Sedona to attend. If before Vipassana I was sure I will stay but then wanted to leave almost every day, with this one I feel like won’t be able to handle it and will most certainly run away, so my staying chances are pretty slim, we’ll see.

Going to the bathroom to stretch my legs and ending up dancing at the end of the train car near the doors! Pushing my iPod public dancing limits further and further, first it was the pier where everyone could see me but where too far away for me to care, then it was various parks at night, now it is right here in the train with people walking by on the way to the loo. The old ladies seemed to be the most suspicious and one even stopped there and watched me. It was great fun and right about 1hr – the usual timing before I tire myself out. Huge thanks goes to the person whom I copied all the top 100 pop songs from before I left for USA – you were so right, we DID have to “grow into it” but now I just can’t stop, the stuff makes me soooooo happy!

One of the images I found during my dream session this morning while looking for keywords “weird friends”. Love it. Seems to sum me up quite right… except for I don’t pretend to be normal 🙂 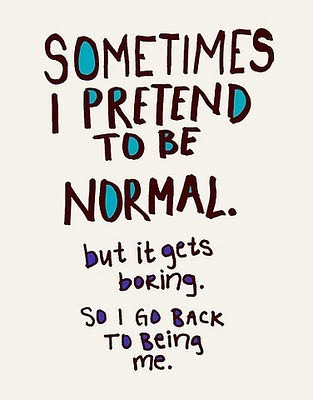