Finally setting off on our much awaited road trip across the states in the RV. It is my first ever family holiday and it feels absolutely awesome.

The first pit stop dinner and my last raw meal of the trip – it was all down the “tasty salty deep fried” hill from there for me. I am making an excuse that its only for a couple of days and that as soon as its over I’ll go on a diet – in Italy… 🙂

And the first adventure of the trip – spotting (nearly stepping on) a live Tarantula in the wild! I cut the filming just short of the tarantula turning around and literally chasing my adopted sister’s boyfriend. Didn’t catch it on camera but got a lessons to let the film roll and trip after for the future. It totally killed my idea of string up a hammock and sleeping outdoors that night. In the morning we saw him taking a shower in the sprinkler nearby, but by then he was almost a family friend. 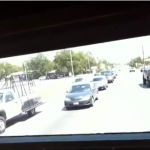